No products in the cart.

The ideal of male attractiveness – from ancient times till now 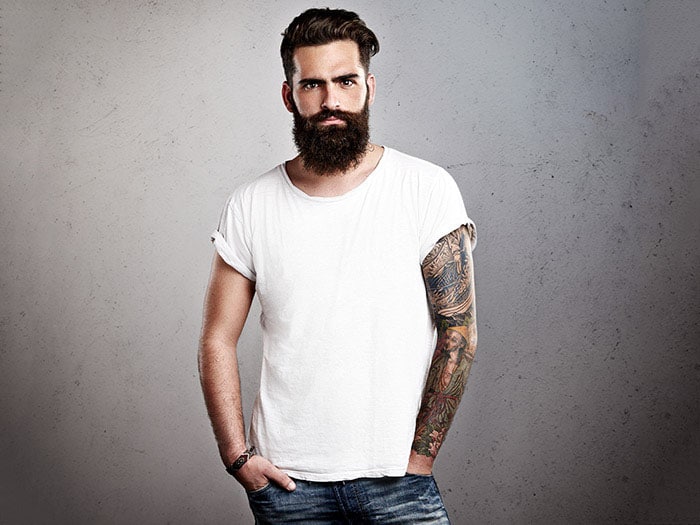 The ideal of male handsomeness has been repeatedly redefined, both in the course of the biological evolution and as a result of the changing worldviews of the different societies. Subjected to mathematical calculations, philosophical analyses and artistic interpretations the appearance of man has always evoked no less interest than that of women.

The ancient Greeks were probably the first ones that dared to close beauty within a strict framework. According to their views, attractive were only men whose all body parts have certain strictly defined sizes and blend harmoniously with each other. The athletic figure with well developed muscles, a broad chest and long legs was literally worshipped. This is not accidental, however, given that Greece is the homeland of the Olympic Games.

In the concepts of beauty most ancient civilizations share a common feature – well-kept hair. The ancient focused not only on its density and length, but also on its color, which is why they developed hundreds of formulas, predecessors of modern dyes. In their effort to always have immaculate hairstyles, the Egyptians created the first ever wigs, by using materials, such as palm fibers, wool, human hair and silver.

During the Middle Ages the interest in the human body was briefly lost, and with it the adoration for the beautiful male physique. Its resumption brought a preference for a fragile, slightly feminine figure, instead of the sporty muscular body. Gradually, however, the well-developed muscles again become a hallmark of the most desired men and remained as such in the following centuries.

In 16th and 17th centuries, gentlemen continued with their bold experiments with hair color, after the short lull in the Middle Ages, when the coloring of hair was declared a vicious practice.

During the 18th century, the subject of women’s preferences become the clean-shaven men with refined appearance, wearing white powdered wigs. This is the period during which clothing began to carry more and more important meaning, giving the possessor not only attractiveness, but social status, as well.

By the beginning of the next century, the fashion of artificial hair was already forgotten and the stronger sex again turned towards natural looks and short haircuts. Beards, mustaches and whiskers also returned triumphantly, while with the opening of the first gyms, the cult of the athletic body was revived.

With the advent of cinema, and in the 20th century of television, the ideal of male attractiveness began to change very dynamically, and even to unite disparate characteristics. Thus, machos and gentlemen with more feminine traits, blondes and dark-haired, whiskered and clean-shaven men …could all be perceived as handsome. The term “sex symbol” was born, which since then has been bestowed on a number of media celebrities.

Nowadays, attractiveness is an equally subjective concept, combining new and forgotten ideals. From the distance of time, we could say that the men of the 21st century take their appearance into consideration much more than their ancestors. The manifestation of that is the emergence of the metrosexual man – glamorous, fashionable, taking advantage of all opportunities for beautification and rejuvenation, provided by the cosmetics and the aesthetic medicine.

The fair sex has always paid great attention to male attractiveness and handsomeness. Knowing this, the representatives of the stronger sex, sometimes openly, sometimes less visibly, have been taking good care of their appearance – a care which has been evolving over the centuries, but has always been accompanying their everyday life, nevertheless.